BACK TO STORY LISTING 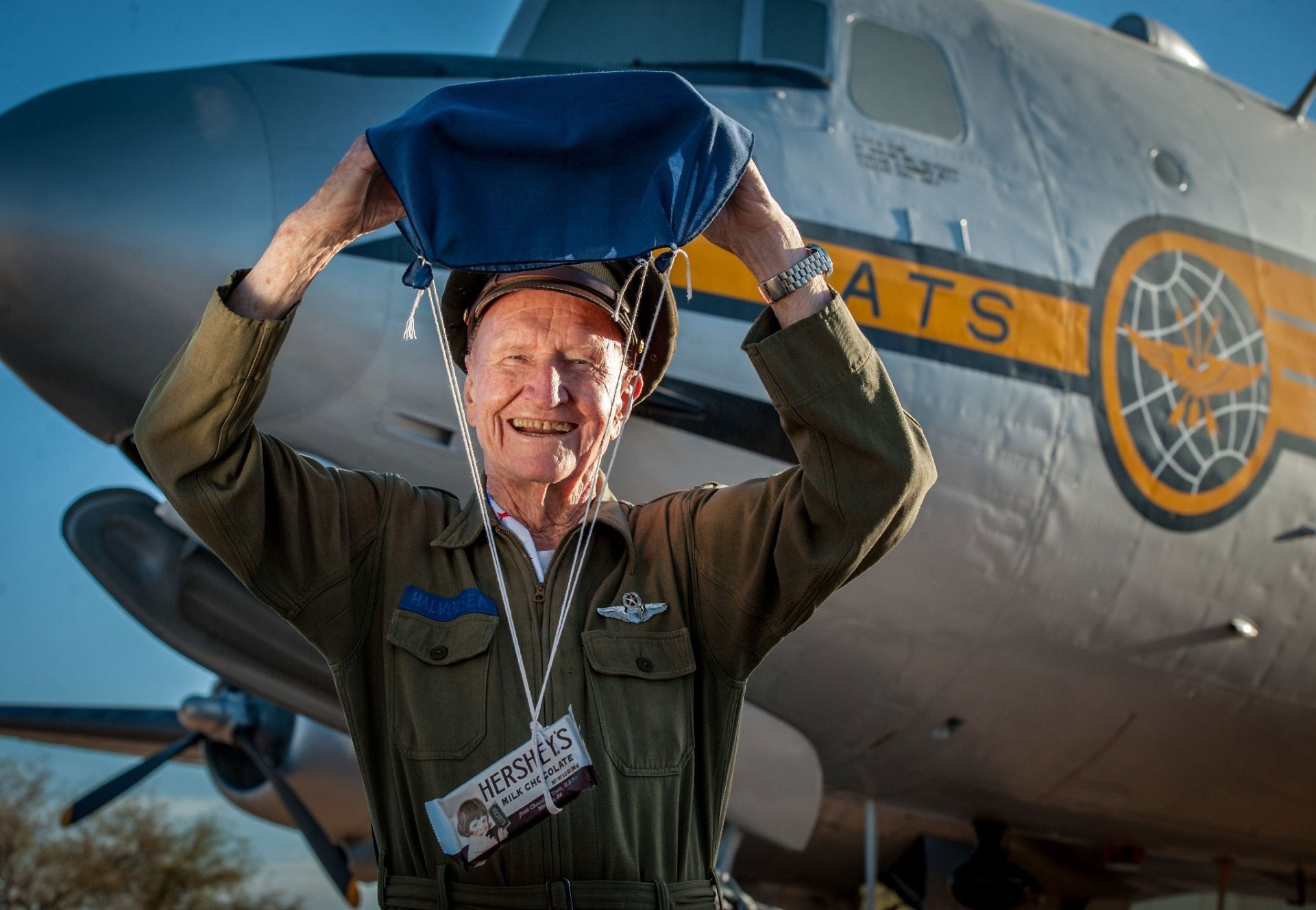 In times of difficulty, turmoil and loss, we look for goodness, hope and joy.  And sometimes we find them in ways we never expect – like in the moments enjoyed by the kind gesture of a chocolate bar.

After WWII ended, Russian forces blocked the Allied control areas of Berlin. As a result, two million German citizens were cut off from food, coal and medicine. Water and land access were blocked, leaving the sky as the only avenue in.

It was June of 1948 when Col. Gail S. “Hal" Halvorsen, a U.S. Air Force pilot who served during World War II, was assigned to the Berlin Airlift to deliver much-needed food, fuel and supplies to the Berliners. The effort was called Operation Vittles by the US and Operation Plainfare by the British.

One day, early in his mission, the 27-year old Col. Halvorsen spotted a group of German children gathering at the barbed-wire fence along the Berlin airfield.  It was common to see children clamoring for attention from the U.S. troops because they often wanted candy and sweets.  But this group wasn’t looking for a treat, these children were looking for signs of hope and freedom.

They asked about the airplanes and how many supplies they could carry.  They wanted to understand the reasons for their condition and learn more about the what the world was doing to help them.  Seeing they had nothing and were hungry, Col. Halvorsen offered two sticks of gum, which was all he had.  He expected them to ask for more, but the children were grateful for the kind gesture and just wanted to hear about Halvorsen’s aircraft missions.

Wanting to give them more, Hal made a bold promise. He promised he would bring them more treats, as long as they agreed to share them.  But he would not hand the treats through the fence – he would drop them from the sky.  He told them that they would know it was him in the air because he would wiggle his wings as he approached. 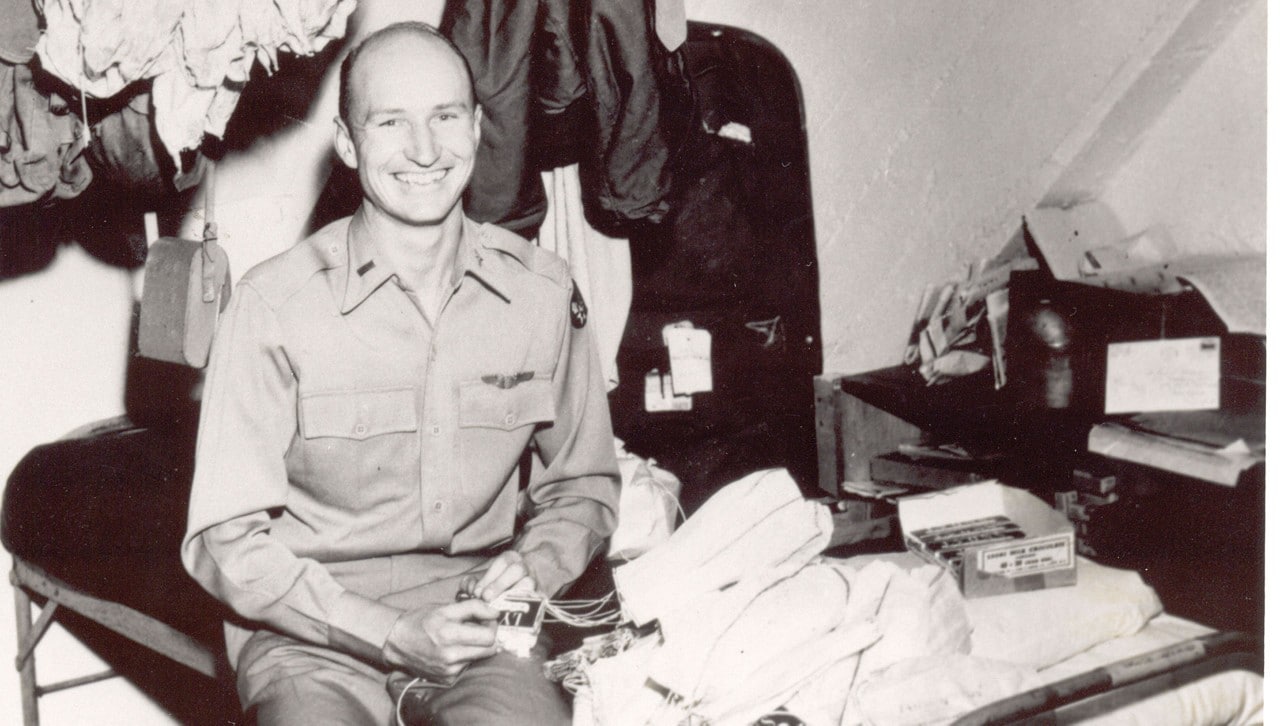 Hal combined his candy rations with other servicemen to make parachutes of chocolate and gum out of handkerchiefs and string. On July 18, 1948, Operation Little Vittles took to the air. Hal kept his promise to those children, dropping parachutes of sweets from the sky.  The children below scrambled to catch the candy-laden parachutes.  People began calling him Uncle Wiggly Wings and The Berlin Candy Bomber because of these heroic acts of kindness.

News of Operation “Little” Vittles (the special name given to the candy parachute drops) soon reached the U.S., which sprung children and candy makers of every kind into action to contribute candy to the mission. From there, the rest is history. By the end of the Berlin Airlift in September 1949, American pilots dropped more than 250,000 parachutes and 23 tons of candy to the Berlin children.

Col. Halvorsen remembers, “how grateful they [children] were to look up at the sky and see parachutes with fresh HERSHEY’S candy bars coming to them from the airplane over their head.

It was a wonderful feeling to have that kind of support from The Hershey Company.”  Hal concludes, “The small things you do turn into great things.”

Col. Halvorsen continues his love of giving far beyond retirement. The Gail S. Halvorsen Aviation Education Foundation was established in 2016 to help children gain a passion for science, technology, engineering, and mathematics disciplines while learning about the principles of attitude, gratitude, and service before self. After all, as Hal always says, it’s the little things that put you on the path of life, the small acts of kindness. 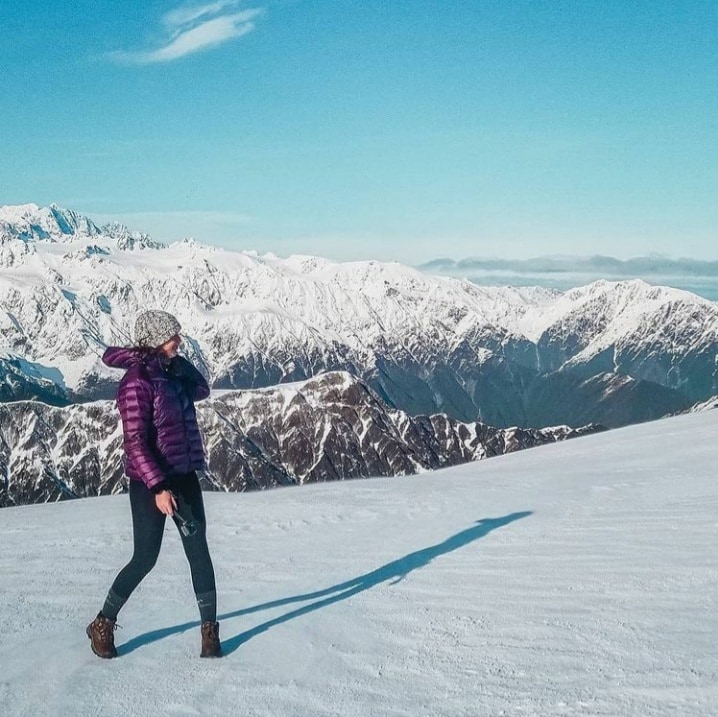 Catherine Putt is a copywriter for The Hershey Company who also has a passion for sustainability and travel. After living in Sydney, Australia, for one year and exploring New Zealand for a month afterward, she realized her true appreciation for living a sustainable life, taking on new adventures and writing meaningful stories. She hopes to encourage you to live an eco-friendlier lifestyle no matter your journey.